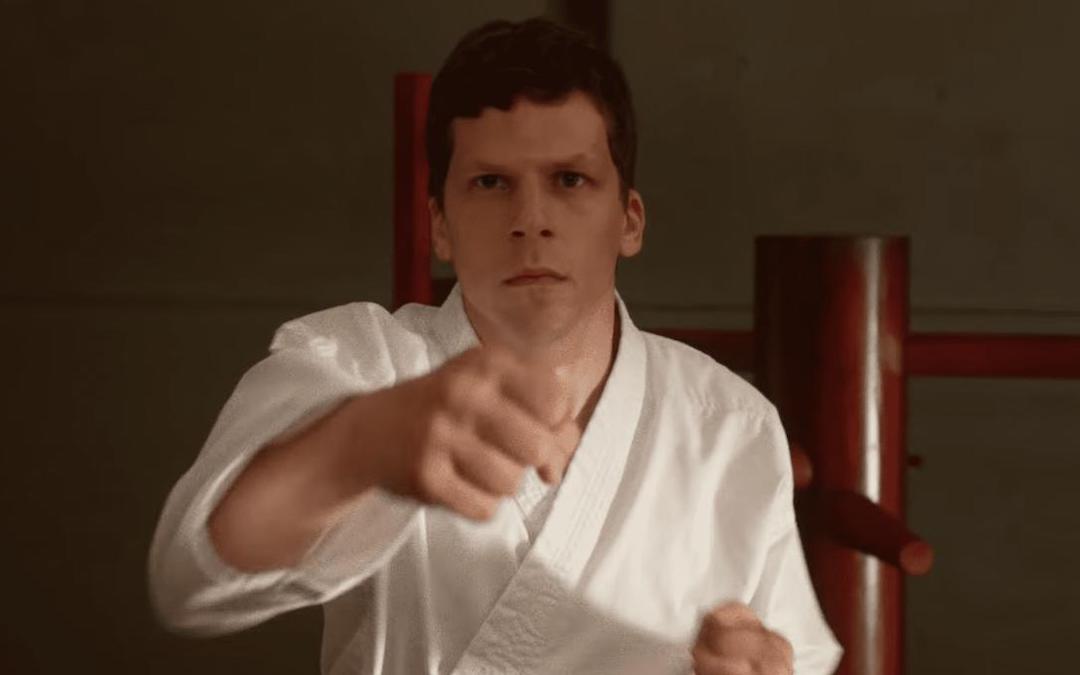 ‘The Art Of Self-Defense’ Review: Three Reasons To See It

Riley Stearns’ The Art of Self-Defense, along with being about martial arts, examines how people who have suffered trauma deal with it both physically and emotionally. Using dark comedy to tackle the subject of toxic masculinity and the various brutish, boorish and bullying ways it manifests in men, it takes a good, long look on how it affects those unfortunately subjected to it.

Casey Davies is the most unassuming of men. At 35 he works as an accountant in an office where he feels out of place, surrounded by men who seem to spend more time making inappropriate comments about women’s bodies and sex than actually doing their work. At home he only has a tiny Dachshund to keep him company. One night on his way home from an emergency run to the store to buy dog food, Casey (Jesse Eisenberg) is brutally attacked and left bleeding in the street by a group of helmeted motorcycle riders. Becoming fearful in a way he wasn’t before, Casey decides to learn self-defense and joins the local karate dojo run by Sensei (Alessandro Nivola). What at first seems like a typical dojo is shown to be anything but when it’s revealed that Sensei and some of his students have a dark and violent side to them.

I was interested to see how a male director and writer would handle a topic some men either fail to recognize or willfully ignore. As a fan of martial arts films, I was intrigued to see how Stearns would use it to deliver his story. Here are three reasons why Stearns – in my humble opinion – brilliantly achieves this and makes seeing The Art of Self-Defense in theaters worth it.

1. The Acting Is Nuanced And Gripping

Audiences are accustomed to seeing Eisenberg playing slightly off-beat, socially awkward characters, but what sets Casey apart is the simmering rage that slowly emerges over time, taking the place of his fear and lack of self-confidence. With the progressive deterioration of his emotional and mental state, Eisenberg ever so slightly changes the way he speaks and moves, and it makes all the difference with his character.

Meanwhile, Imogen Poots deserves credit as fellow dojo student Anna, a young woman who for years has worked with and for Sensei, placing her knowledge and skill above that of her fellow students. For years she’s withstood the belittling, passive-aggressive comments and chauvinistic attitude that permeate the air. In Anna, there is the sense of a storm that resides below her calm exterior. Poots does a fantastic job showing just how much control Anna maintains over her emotions in one particular scene where she participates in a sparring match with Kenneth (Steve Terada). In the space of one punch (I couldn’t resist), Anna snaps into a berserker rage and beats the living daylight out of him, proving to all she’s not one to be trifled with.

And as Sensei, Nivola exudes an aura that makes you wonder how he became like this, a toxic brew of outdated ideals of masculinity. While every villain – and Sensei is definitely a villain – doesn’t need to have a backstory Nivola conveys a sense of loneliness and insecurity in Sensei that makes you want to know more about his past.

2. The Tone Shifts In Brilliant And Subtle Ways

At first, The Art of Self-Defense feels just as mundane as Casey’s life, a necessary tone as we’re living his life with him, that get up, go to work with people we don’t like, come home to the dog, go to sleep, rinse and repeat life. Once the assault happens, however, the tone of the film changes over time just as Casey does, in subtle and unsettling ways, helped by haunting cinematography by Michael Ragen and the eerie unsettling score by Heather McIntosh. There’s a tension that develops, and while it’s occasionally lightened through funny dialogue, it never completely dissipates.

When Casey is invited to join the “night class,” he learns that Sensei is running what could best be described as an exclusive fight club, with specially selected members of the dojo. Here no one is a friend but an opponent, and once exposed it becomes apparent that something dark within Casey has been released. It creates an extremely uneasy feeling as the tone of the movie gets ever darker and more unnerving.

3. The Story Is Relevant Without Being Patronizing

Anyone who has suffered a trauma or knows someone who did will find plenty to relate to, particularly with Casey and Anna. While it could have been easy to make this a film about macho men who bully and haze others for the fun of it, Stearns dives deeper by showing how being assaulted can have a profound effect on the mental state of the victim. Casey taking up karate was initially about just learning how to physically protect himself but being someone who never had friends or a mentor, he is easily influenced by Sensei and his teaching. Finally feeling like he found a purpose, Casey applies everything he learns at the dojo to every aspect of his life to the point where it becomes obsessive. It influences everything from the way he dresses to what he eats, and, most dangerous of all, his personality and ethics.

Anna also has her own layers of trauma revealed in nuanced ways. We rarely see good examples of internalized misogyny in entertainment, particularly not ones that come from an authentic place. But Anna being surrounded by men who see her as less-than simply because she’s a woman has caused her to internalize their messaging as a survival technique. Knowing that men take little stock in anything she has to say, Anna chooses to show she’s worthy of being a black belt, and to do this she must prove that she can be just as unforgiving and brutal as the men, the only “worthy” way to earn it. The movie is certainly about toxic masculinity, but not about celebrating it, rather revealing how it insidiously corrupts adults who then teach it to children, creating a destructive cycle.

The Art of Self-Defense is in theaters this weekend.

News Of The Week: ‘Spider-Man: No Way Home’ Trailer Confirms Doc Ock Is Back

After a few years of eschewing origin stories in favor of skipping ahead to the main event, Marvel gets back to its roots with the upcoming...

Disney’s Free Guy, the last movie to be made under the then-20th Century Fox banner, hits theaters on August 13th and it’s about to... 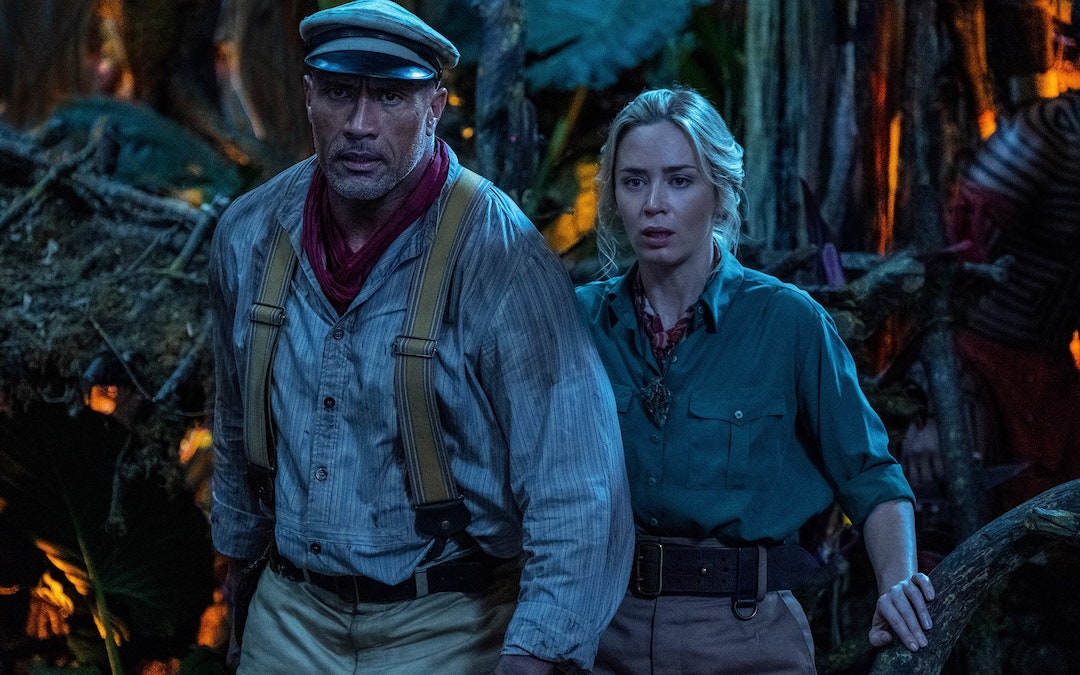 Disney’s Jungle Cruise hits theaters this Friday, and it’s the next tentpole based on a Disney ride that the studio hopes may launch...