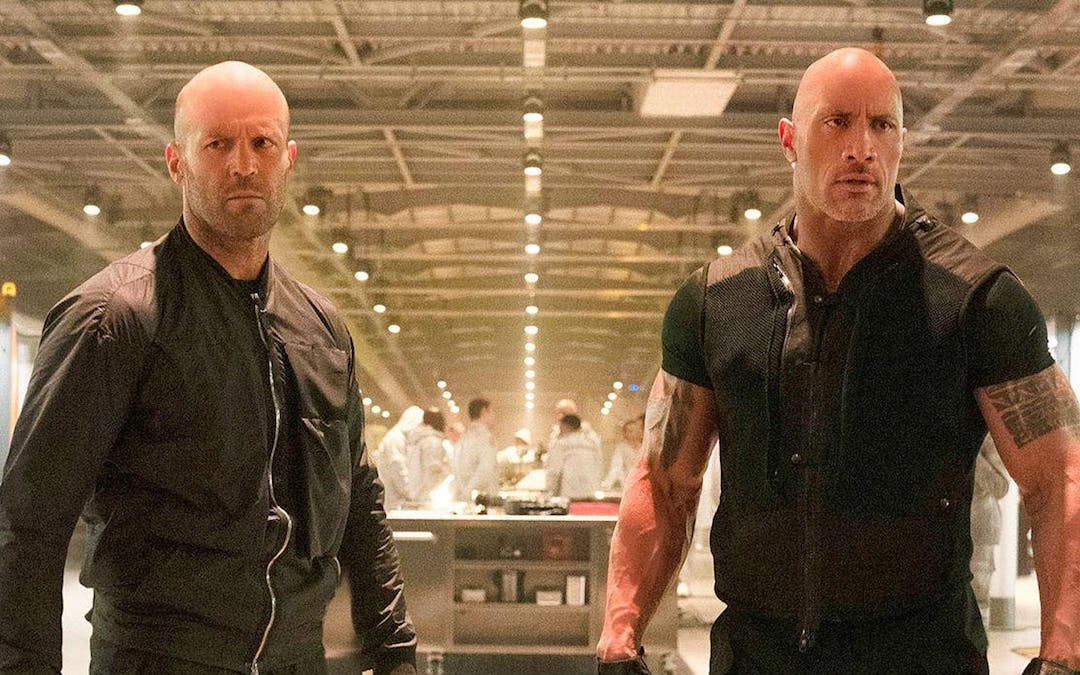 As the Fast & Furious franchise hurdles farther and faster away from reality, its first spinoff – David Leitch’s Hobbs & Shaw – punches buddy-cop formulas into bro-verdrive. The summer’s most unexpected bromantic comedy jammed full of pyrotechnics, punishing hits, and more insults than a Jeff Ross roast special. Dwayne Johnson and Jason Statham will warm your heart with their will-they-won’t-they bromance if they don’t pummel your face in first. Ah, to be excited about blockbuster excitement that’s only ever about having big-ticket fun. When are we, the ’80s?

In 2019’s joint operation, Deckard Shaw (Statham) and Luke Hobbs (Johnson) are tasked with containing a supervirus dubbed “Snowflake” before it infects the world. The technology-obsessed outfit Eteon wants to cleanse Earth of its weakest inhabitants, so they send their super-soldier Brixton (Idris Elba) on the same quest. To complicate matters, Shaw’s sister Hattie (Vanessa Kirby) finds herself caught in the middle as she’s the only one who knows the virus’ whereabouts. Can Hobbs and Shaw quit bickering and flexing on one another long enough to save humanity? That’s a tougher ask than you’d assume.

Universal is releasing Hobbs & Shaw this weekend starting August 1st. In the meantime, here are three reasons why this faster and furiouser beat-’em-up would get even Xander Cage’s approval.

1) You’re Here For The Smashing, Bashing, And Nonsense Action

Do I need to recount how ludicrous Dominic Toretto’s exploits became after Fast Five? Parachuting automobiles. Tank Fu. Hobbs throws a torpedo across iced-over waters at one point. These are action fantasies of grade-schoolers executed on extravagant budgets, so you better believe Hobbs & Shaw continues tradition. I mention Vin Diesel’s adrenaline-junkie Agent Cage above because Leitch’s offshoot feels as spectacularly zany as xXx: Return Of Xander Cage in the best of ways. My dreams of a crossover will never prove doable (double Diesel?!), but these teams uniting would put the Expendables out of business. Stallone’s crew wishes they had their own Vanessa Kirby (for my money the film’s standout performer).

Hobbs isn’t a natural driver, more the brute force, but Shaw’s obsession with McLaren roadsters brings road rage to a whole new level. As Brixton chases Shaw’s sports car through traffic or under sixteen wheeler gaps, his modified motorcycle morphs like a transformer to avoid danger. Brixton’s cybernetic enhancements favor hand-to-hand advantages and brawler bravado, but a vehicular “human centipede” sequence – highlighted by Hobbs lassoing a helicopter with a tow truck’s winch – stays true to Fast & Furious‘s signatures. Does Hobbs leap onto the backs of Eteon soldiers, sans harness, as Hattie’s captors sprint vertically down a skyscraper’s exterior? Of course! Yet aromas of gunsmoke and exhaust fumes aren’t altogether forgotten.

Hobbs & Shaw is self-referential, metatextual, and leans heavily into the catalogs of both stars. Be it blatantly referencing iconic pasts – “The People’s Eyebrow” or The Italian Job – or intercutting fight sequences with machismo measuring gags. At no point do you believe the film’s titular heroes can lose, which some might find a tad vexing. With lives on the line, neither Hobbs nor Shaw can stop from burning each other with Mom joke insults, emasculation attempts, and playground name-calling. At times, Chris Morgan and Drew Pearce’s screenplay exists as an excuse to call out Johnson for being an overly oiled gigantic baby. At others? Apex predators sheath their weapons and verbally berate one another with flirtatious chemistry you almost think Hobbs or Shaw might finally act on.

It’s inarguably a Lethal Weapon redux by tone. An assassin of elegance who stealthily infiltrates fashion shows must team up with a mountain of muscles less subtle than the pizza guy in an adult movie. As Rob Delaney’s Agent Loeb remarks, Hobbs and Shaw couldn’t POSSIBLY let bitter resentment derail an apocalypse-preventing mission – right? Maybe Leitch allows his production to wink a little too hard the audiences’ way, but it wouldn’t be Hobbs & Shaw without both “heroes” nitpicking the other’s execution throughout. Zingers galore whether they’re at Brixton’s expense, or skewering multiple cameo participants, or recreating cliched action dialogue of yesteryear.

3) Seriously. You Saw ‘The Fate Of The Furious.’ What Did You Expect?

Hobbs & Shaw is a borderline action farce in that material is always one small nudge away from parody, but that’s its draw. Why does Hobbs demolish Eteon henchmen in a Samoan battle cloth but then put a shirt on when continuing the chase? How do romantic or dramatic elements feel more forced than a Michael Bay movie? Who wrote some of this dialogue, a bot fed nothing but cheesetastic, ’90s action cinema? Then again, that’s exactly why you’re buying a ticket. To watch robot Idris Elba call himself “Black Superman” while gnawing through villain one-liners like a veteran big bad.

When it’s all said and done, Hobbs & Shaw circles right back to the “family forever” vibes that define Fast & Furious movies as much as Corona logos and chop-shop charisma. Familiar faces return, humans prove artificial intelligence is no match for coexistence, and “‘Aiga” – Samoan for “family” – proves invaluable (hope I’ve used that word correctly). I could have done with less puerile humor and johnson-measuring (Star-Lord and Thor ain’t got nothin’ on these two) and cleaner Act III warfare (shaky-cam chaos), but franchise devotees will enjoy Leitch’s NOS-injected mayhem. Maybe just as much as Stratham and Johnson enjoy poking fun at one another’s careers through in-character jests? When a cast is clearly loving their jobs, that translates to screen. Don’t let tempers fool you – Hobbs & Shaw may be the summer’s most heartwarming film to be covered with lumps, bruises, and pound-for-pound brawn.

Hobbs & Shaw is in theaters this weekend. 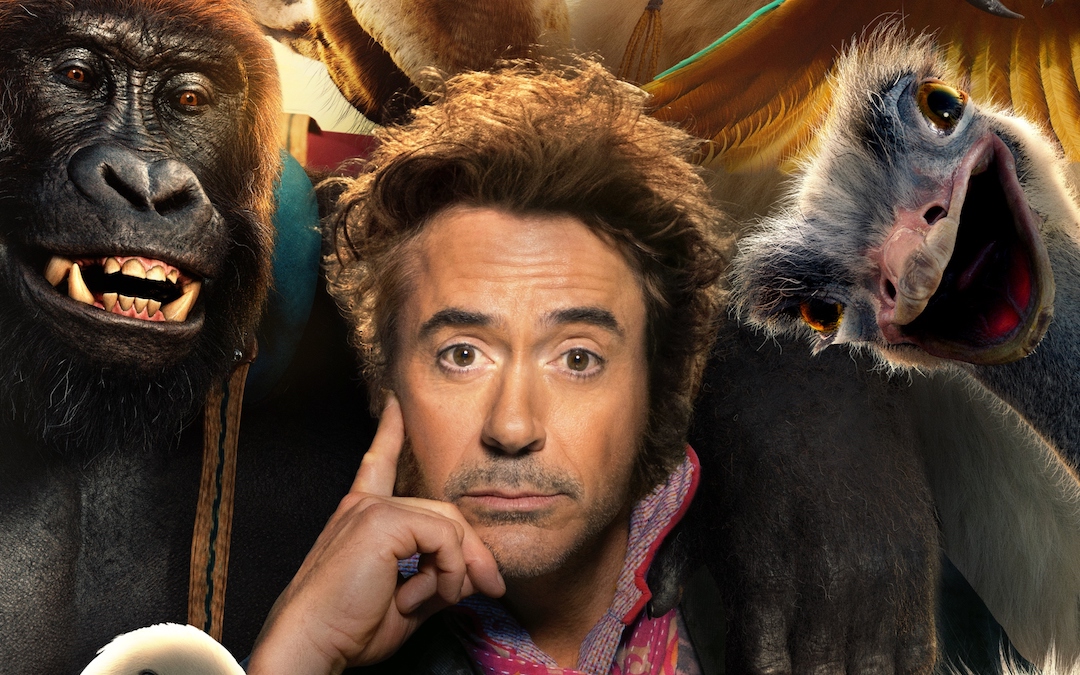