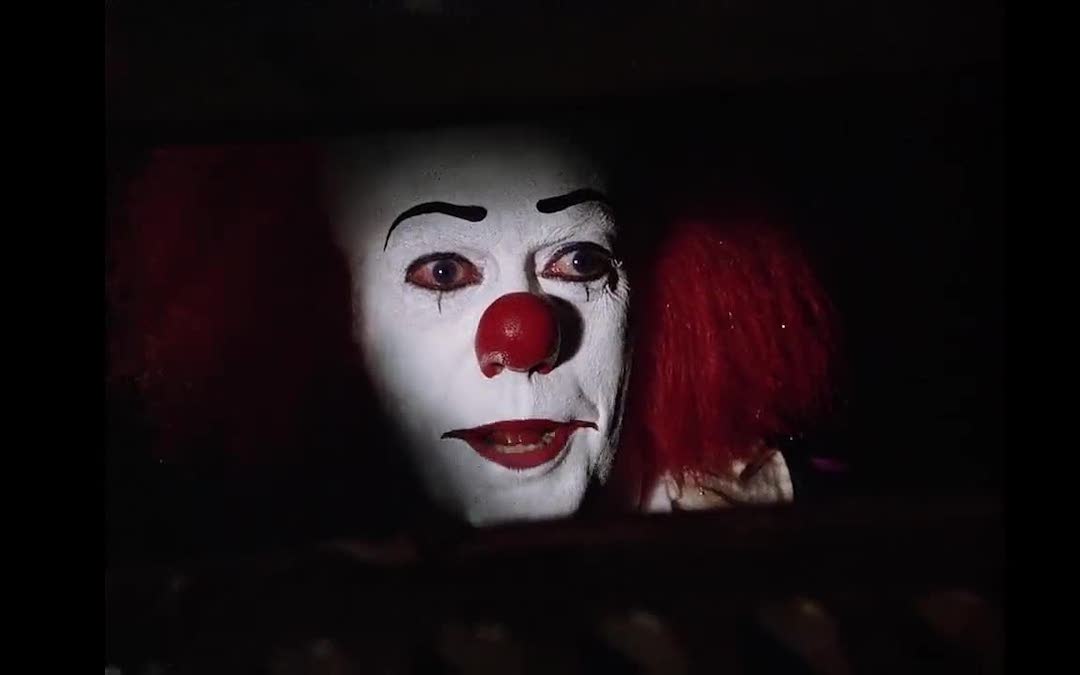 Freaky Facts About Pennywise From Stephen King’s ‘It’

I think we can all agree that Pennywise is Stephen King’s scariest villain, right? I mean, sure, longtime Stephen King readers know that Randall Flagg/The Man in Black is the most ubiquitous and influential in-universe of all King’s baddies. But let’s be real: If you’ve ever had a hard time sleeping at night thanks to the King of Horror, it’s almost certainly because of Pennywise.

But there is so much more to Pennywise than you see on the surface. Whether it’s his mythology in the books or what went behind the scenes of the filming of the miniseries and the movies, the character of Pennywise is fascinating. Here are some fun facts you likely never knew about Stephen King’s killer clown.

Pennywise Facts From The Book

1. Pennywise isn’t a clown or monster at all, but an interdimensional cosmic entity.

When we think of It, we think of Pennywise. But Pennywise is just a mask It wears. In reality, its true physical form is beyond human comprehension, the massive spider shape it takes at the end of the story the closest approximation we can get. Its true form exists in a cosmic void between dimensions known as the Macroverse (also referred to as the “Todash darkness” in the Dark Tower series). It itself refers to this void as the “deadlights,” and it drives anyone who gazes upon it insane.

A malevolent, immortal, cosmic entity needs an opponent that is equally as strong. Thus, It’s natural enemy is a cosmic space turtle (I know, bear with me, Steve wrote a lot of this stuff back in the days when he was off the wagon but I swear it all makes sense) called Maturin. Maturin is another ancient Macroverse entity who created the universe. They, in turn, were created by an even more ancient being known as The Other (or Gan). Maturin and It have been locked in endless battle since before time existed, their very natures diametrically opposed with Maturin representing creation and It representing destruction. It really hates that turtle.

Naturally, you wouldn’t expect an ancient cosmic being of pure destruction to respect human beings. But It’s arrogance extends even to similar creatures. There are several points in the book from It’s point of view where It describes itself as a superior being. Maturin is the only creature that It even comes close to respecting, and even then, It describes Maturin as only being “close to his superiority.” It does not believe mere human children can defeat it, and expresses surprise every single time they thwart him, always secure in his superiority. Only at the very end does It question whether or not it’s as superior as it always thought, and even then, It assumes it is The Other working through the children and not the children themselves who keep defeating it.

4. Pennywise was NOT inspired by serial killer John Wayne Gacy.

Because of his background as a clown and children’s entertainer, John Wayne Gacy is the person many people believe was the inspiration for Pennywise. Turns out, they’re wrong. Stephen King wanted a monster that would be the most terrifying thing possible for a kid and he decided clowns are inherently scary. He modeled the look of Pennywise on Ronald McDonald, as well as Clarabell the Clown from Howdy Doody and Bozo the Clown.

5. It has appeared in multiple Stephen King books.

If you’ve read Stephen King, then you know all his work takes place in the same universe (yes, all of it) and there is an overarching mythology. That means It has popped up in a number of books. In Tommyknockers, a character is traveling through Derry when he sees Pennywise appear in a storm drain. In Dreamcatcher, another character sees graffiti that reads “Pennywise Lives.” He is also mentioned in 11/22/63, Insomnia, and short story “Gray Matter,” and other books of King’s make references that may or may not be about It. That clown gets around.

Pennywise Facts From The 1990 Miniseries

6. Tim Curry almost didn’t take the role of Pennywise because of the makeup.

The initial designs for Pennywise in the 1990 miniseries were much more heavily made-up and dramatic. However, Tim Curry almost passed on the role due to the makeup involved. He remembered his time on Legend, where he spent hours and hours in the makeup chair to be made up as Darkness and was reluctant to do it again. At his request, the makeup for Pennywise was toned down – and as it turned out, Curry’s performance was so strong that he didn’t even need the extra makeup to seem scarier.

7. Pennywise’s signature crazy red hair was all real, though.

He might not have wanted to be in the makeup chair for hours, but Tim Curry dedicated himself to the role in other ways. Most people think Pennywise’s wild puffs of red hair were a wig. But it was actually Tim Curry’s real hair, which he grew out for the role and then had teased and frizzed up every single day.

8. Alice Cooper was considered for the role.

9. Tim Curry would entertain the child extras during slow times.

The theater scenes were slow to shoot and involved a lot of waiting between retakes. To pass the time, Tim Curry would come onstage and have singalongs with all the child extras. Most had no idea who he was and thought he was just a clown that had been hired to keep them entertained during the downtime.

10. Tim Curry has less than 20 minutes of screentime.

For a role that is truly iconic and a character that scared an entire generation of kids, Tim Curry appears as Pennywise for less than 20 out of 192 minutes of the original miniseries. He doesn’t even appear at all in the last 15 minutes. In other words, he appeared for just over 10% of the screentime of the entire miniseries. And yet he made such an impression on us, a testament to how terrifying he was in the role.

Pennywise Facts From The ‘It’ Movie

Bill Skarsgård as Pennywise in ‘It’ (Credit: Warner Bros.)

11. The prosthetic teeth that Bill Skarsgård wears made him drool.

Bill Skarsgård wears prosthetic teeth to get that big, bucktoothed grin of Pennywise. The prosthetics made him drool excessively but they leave a lot of that in the movie as director Andy Muschietti felt it nicely fit into the ravenous nature of Pennywise. The drooling around children was worked into the story.

12. Bill Skarsgård had nightmares during and after filming – but not for the reasons you think.

Bill Skarsgård spent months filming It, and he had nightmares during the production and for a few months after. However, his nightmares weren’t about Pennywise, but about people seeing Pennywise: He’d dream he was walking down the street in Sweden in his full Pennywise costume and makeup and he’d freak out in the dream because he was upset people would see the look and the mystery would be ruined.

In certain scenes, Pennywise moves his eyes in two different directions. People initially thought it was CGI, but it was all Skarsgård. When Muschietti was originally talking to Skarsgård about the role prior to filming, he told Bill that he was going to have Pennywise’s eyes deviate in post. To which Skarsgård replied, “Oh, I can do that!” And Pennywise’s weird smile? That’s also Skarsgård, who credits his older brother Gustaf with teaching him how to move his lips in such an unnatural way.

14. Filming the first movie was a lonely experience for Skarsgård.

In order to preserve Pennywise’s scariness and to avoid leaked pictures on set, Andy Muschietti purposely kept Bill Skarsgård away from the other actors on set during filming. He was only around a 3-person team for costume and makeup. It made his performance genuinely shocking and surprising to the other actors, but it also meant Skarsgård himself frequently felt lonely on set, especially when he would hear stories of how much fun his fellow actors were having together. Poor Pennywise.

15. The list of actors considered for the role of Pennywise was lengthy.

Even more than the miniseries, the list of actors who were considered for or got into talks for the role was long. Outside of Skarsgård, the list also included Johnny Depp, Tilda Swinton, Richard Armitage, Tom Hiddleston, Jackie Earle Haley, Jim Carrey, Kirk Acevedo, Willem Dafoe, Paul Giamatti, Hugo Weaving, Doug Jones and Channing Tatum. At one point, Will Poulter was cast in the role, but he had to back out due to scheduling conflicts and Skarsgård got the job.

Pennywise Facts From ‘It Chapter Two’

16. Bill Skarsgård freaked Bill Hader out on set with the eye trick.

Remember the freaky eyeball trick? Co-star Bill Hader wondered what sort of CGI editing had been used to achieve the effect and asked Skarsgård about it. “Oh, you mean this?” Skarsgård replied in full costume and makeup, moving his eyeballs in different directions. Hader freaked out. (As any of us would when faced with a 6’4″ clown in full makeup.)

17. He had a better time filming the second movie.

Skarsgård was no longer sequestered by himself on the sequel and was allowed to interact with the adult actors, since his look and freaky mannerisms were already well-publicized by that time. As a result, he had a much better time shooting the second movie and felt less isolated from his fellow actors.

18. He’s so intense he even freaked out the VFX team for the sequel.

Before they began filming the sequel, there was a mocap test. Skarsgård went in and got a scene to read, and got mocap dots put on his face to scan his performance. He was worried that, after two years, it would be hard to slip right back into the role of Pennywise. But he needn’t have worried. He was so good and so unsettling that the VFX team in the room – most of whom had never seen him perform live before – were creeped out.

There you have it. In book or on screen, Pennywise is both scary and fascinating. If you haven’t seen It Chapter Two yet, what are you waiting for?

On Friday, October 1, YA drama After We Fell hits theaters. If you’re not a teenage girl or woman in your 20s, you might be forgiven for...